NHL 18 have not yet made the jump to Nintendo’s portable console, but, producer of NHL 18, Clement Kwong emphasized that it could well happen in the future. He said: ” While we always continue to assess opportunities, so it’s not to say that’s a hard no, it’s not on our radar at this time.” 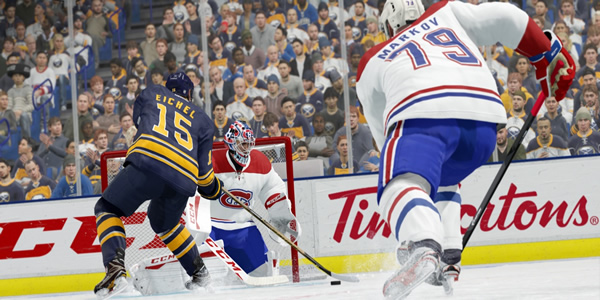 However, NHL 18 will be supporting the PS4 Pro and Xbox One X, as Clement Kwong confirmed that NHL 18 will be enhanced on the PS4 Pro and Xbox One X. Traditionally, the NHL series has been very slow to transition to new paradigms and technology – a full current generation version of the franchise did not happen until two years ago, unlike Madden and FIFA, the games still have not adopted Frostbite.

NHL 18 is due out on the PS4 and Xbox One next month, on September 15. You can already pre-order the game and save on one of the editions of the game. This year, EA offers multiple NHL 18 editions including Regular Edition, Young Stars Edition, Young Stars Deluxe Edition. Each editions’ price are also different, more details about three editions, reference from here.

The NHL 18 is the popular ice hockey game, the Hockey League of Champions (CHL) will appear in the new version of NHL 18. All 32 players will be licensed in the game, the official website of the tournament informs. The feature of NHL 18 this year is about capturing the speed, skill and creativity of the new NHL, it’s bound to be a successful and unforgettable ice hockey simulation video game.