A new image is making the rounds, reportedly showing the next year or so of Destiny content plans. We all knew that Activision/Bungie’s 10 year, $500M experiment was going to keep pumping out new content to keep players engaged, but we didn’t know what form that would take in the long run. Now, we just might.

Granted, the other pieces of DLC are all referred to as expansions in Destiny lingo, but Comet boasts far more content than these lesser add-ons, and would be the first to add in a new area to the map. Deciphering the blurry slide reveals 12 story missions, 4 strikes, 1 raid, 1 new location and 6 PvP maps, in addition to new subclasses and weapon types. Now that’s an expansion. 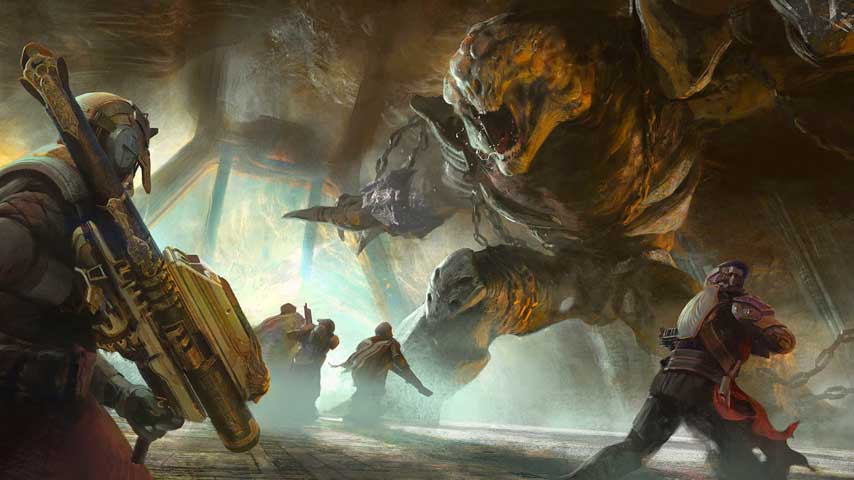 Bungie hasn’t confirmed the authenticity of Comet yet, but as we head into 2015, I’m guessing that will change. I think what we have here is a look at Bungie’s longterm content plan, and depending on how it’s handled, I kind of like it.
A chief complaint about the recent Dark Below expansion was that it was misusing the term, particularly compared to hefty Blizzard-style expansions that are truly game changing. But what we have with Comet is practically half the content of the original game, at least in terms of missions and strikes, and finally the map will be getting significantly bigger with the addition of an entirely new area. There’s no pricing data for how much this will run, but my guess would be at least $30-40, judging by what it contains and the fact that current, shorter DLC is $15-20. I don’t think it’s possible they could get away with charging a full $60.

This also may imply that Bungie may have a very specific strategy for the next ten years mapped out. The pattern laid out here is the original game in the fall, then two shorter DLCs, then a big expansion the following fall, then two more shorter DLCs, then presumably either another big expansion in fall 2016, or perhaps the debut of Destiny 2. We know a true sequel is already in the works, but we don’t know how it will interact with the content behind it. I have to imagine character data will transfer even if there’s a new disc, but I suppose that’s no guarantee. Still, it would be silly to have this much content to bolster your characters, only to have a hard cut-off at a sequel. But that’s a problem for at least 2016, I suppose.

And there are plenty more problems Destiny needs to focus on now.

This image suggests that the other shorter DLCs will be more or less like The Dark Below, which may prove disappointing to fans for a number of reasons. The two primary issues that need to be addressed in the wake of the first DLC are 1) storytelling and 2) progress resetting.

Storytelling is exactly what it sounds like. In The Dark Below, players got only three new story missions with zero cutscenes and a new character who only existed as a Tower-fixture quest-giver. The original Destiny had storytelling issues even with its handful of cutscenes, but it seemed The Dark Below took yet another step backwards in terms of making the world feel alive and your missions important, and progress needs to start being made on that front, lest the universe slip into permanent irrelevance.